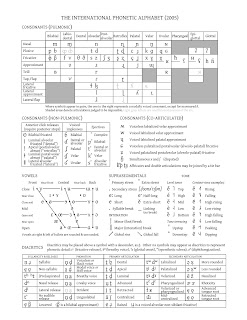 For a guide to pronouncing IPA transcriptions of English words, see IPA chart for English.
The general principle of the IPA is to provide one symbol for each distinctive sound (or speech segment).[10] This means that the IPA does not use letter combinations unless the sound being represented can be regarded as a sequence of two or more sounds.[III] The IPA also does not usually have separate letters for two sounds if no known language makes a distinction between them (a property known as "selectiveness"[2]),[IV] and it does not use letters that represent multiple sounds, the way
at 12:33 AM