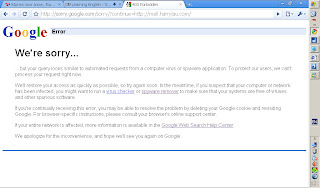 i can not access my website these days. maybe it is because the virus on local networks. but it is strange that i can access other google service and some pages in my site but can not visit homepages that have a domain name.

someone told me people in china mainland can visit blogger already. but it seems not true. is it ?

... but your query looks similar to automated requests from a computer
virus or spyware application. To protect our users, we can't process
your request right now.

We'll restore your access as quickly as possible, so try again soon.
In the meantime, if you suspect that your computer or network has been
infected, you might want to run a virus checker or spyware remover to
make sure that your systems are free of viruses and other spurious
software.

If you're continually receiving this error, you may be able to resolve
the problem by deleting your Google cookie and revisiting Google. For
browser-specific instructions, please consult your browser's online
support center.

If your entire network is affected, more information is available in
the Google Web Search Help Center.

We apologize for the inconvenience, and hope we'll see you again on Google.

atl2-2.0.5-2-i686.pkg.tar.gz.gz contains an executable file. For
security reasons, Gmail does not allow you to send this type of file

My archlinux on eeepc (1)

Maybe it's unfair to archlinux if we just look it as a lightweight
linux distribution but it is really slim by default.

I have installed this distribution several months before. I just used
the command line during last days but finally if found I need a real
desktop instead of the text based command. Because my virus protection
software is invalid on windows. I decided to install a desktop on
archlinux though I really need several commercial software for windows
during my daily life.

1. desktop environment or window manager ?
I need a window manager indeed. A window manager can to anything i
really need on linux, but it seems that I am not very interested in
doing whole the configuration things for a desktop. So if a
lightweight desktop evironment is not a bad idea for me.


GNOME or KDE or Xfce or LXDE ?
i dont like gnome though i have to use it during working days. i like
KDE but it seems very buggy as least for the earlier version serveral
years ago. It seems Xfce and LXDE are both suite me, but xfce uses too
many gnome packages. what's important thing is i dont know if LXDE is
useable ... haha...

3. drivers for eeepc
I installed the wireless driver manually several months ago. I am not
sure if it is supported in the lastest kernel.

6. what's next?
a. my biggest problem is how to use windows software on it. need to
try wine but what can i do if failed ?
b. fonts may need further configuration because the english fonts is
so ugly in my current setting
c. play with alsa... volume is so small sometimes.
d. play with wireless setting -- randr is not working properly. i may
write a script to manually configure it.
e. tools for hardware: blue tooth ? camera ? battery monitor?
especially, acpi configure ?
f. at least i need to find out how to power off camera and bluetooth
and how to change to save power mode when i am using battery.

maybe i don't have time to solve all of these one by one. it works
well now at least. :)

after all, it is amazing that i did not encounter any issues during
the desktop setting. compared with about 8 years ago when i was
playing with redhat this is paradise.

fluxbox is based on blackbox code wirte in c++. openbox 3 rewrite all
source code in c.
openbox: xml configure file which means easy to config
fluxbox supports tag, openbox doesn't..
license: fluxbox is MIT, openbox is GPL ==> is it important for normal
user ??hehe
fluxbox supports panel and openbox itself does not

which one will you choose ? :)
openbox, just because it is the default window manager in LXDE.

here is some comments from freebsd forum:

so i decided to choose between fluxbox or openbox.

anyway i have a lot of questions to this community:
1) is openbox and fluxbox still in active development ?
2) is JWM theme based Window manager ?
3) is there any window manager that can support plugin or applet ?
4) is there any good file browser that doesnt have a lot of
dependencies(note: i like ROX filer) ?
5) is there any text editor like GEdit that doesnt have a lot of dependencies ?
I think you made a good choice. Both Fluxbox and Openbox are in very
active development and have a very large user base. They might be in
too active development because they are slowly getting bloated. In my
bias opinion Openbox is better What kind of answer could you expect
from somebody who used Openbox for a very long time. Joking aside the
big thing for Openbox is the fact that is coded in pure C. If you like
to have panel, task bar and those things Fluxbox is probably better
choice.
All those things can be added to Openbox but then you end up
installing another thing or two. For instance Openbox+Xfce panel is a
killer combo for people who like more or less full desktop
environment.

Let me answer the rest of your questions

@2 JWM is not based on anything. It is written from the scratch.
It is really very, very good for people who like to have built in
task bar, pager, and the launching bar. It is incredible that all that
is just little bit bigger than dwm which has 2000 lines of C code.

@4 Rox is not a browser. It is a file manager. There are three
principle types of file managers.

I probably left out some interesting examples but you got the idea.
The least bloated file manager is command line + commands
(ls, du, rm, mv, cp) and few filters. If you have to have a spatial
file manager I really like ROX. For a Ortodox file managers I really
like deco but it is not in active development and it is useless in
console as it can not adjust the screen. OFM is very good code base
for somebody who wants to write a good non bloated console based
ortodox file manager.
Be aware that it is GPL so you will have to write everything from
scratch if you prefer BSD license like me.

@5 Learn ed and vi pronto or you will regret very soon. I do NOT like
VIM for me vi is nvi that comes with the base or Heirloom vi.

Emacs sucks IMHO and I have used it seriously. I even learned the Lisp
because of it.